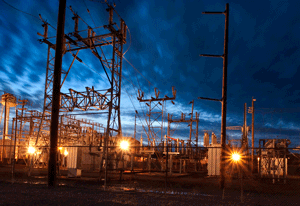 At each substation, anywhere from eight to twenty-eight SightSensor smart thermal security cameras are positioned along the perimeters, paired with a Pan Tilt Zoom camera. When an intruder enters a secured area or even approaches a fence line, the video analytics inside the SightSensor detects the breach, auto-steers a PTZ onto the source of the event, triggers a smart lighting system to illuminate the facility, and sends an alarm with video to a remotely located security operations center. There, remote guards can view the video in real time and notify local law enforcement to respond.

The system is ideal for substation security, and operates with high accuracy day and night, regardless of bright sun, complete darkness, or bad weather.

The utility considered several solutions to secure substations, ultimately choosing the SightLogix thermal video system based on its detection reliability, low nuisance alerts, and lower overall cost. Because they detect intruders over long distances and wide areas – a single SightSensor can detect a person up to 600 meters away, and create a large buffer zone outside the fenceline to meet NERC CIP requirements – the utility was able to reduce supporting infrastructure like poles and power, cutting costs significantly.

The utility is also using the SightSensors to create virtual barriers along open areas that surround a building or an asset to prevent insider theft where physical or man-made boundaries are unlikely to exist.

“When it comes to securing substations, utilities need real-time awareness to reduce risk, protect the stability of the grid, and satisfy NERC mandates,” said John Romanowich, SightLogix president and CEO. “Given our track record of providing a high level of security at critical sites, SightLogix has become the solution of choice for securing the nation’s power infrastructure.”

SightLogix systems are being used at utilities throughout the United States, Canada, Europe and the Middle East to protect assets that include substations, solar farms, wind farms, hydro facilities, power transmission and distribution, and nuclear power plants.